The Ontario government, to my surprise, has caved to public pressure from a small group of anti-wind folks and backtracked on its previously stated commitment to encourage the development of offshore wind in the Great Lakes. It must be election time. This news release just came out:

Ontario is not proceeding with proposed offshore wind projects while further scientific research is conducted. No Renewable Energy Approvals for offshore have been issued and no offshore projects will proceed at this time. Applications for offshore wind projects in the Feed-In-Tariff program will no longer be accepted and current applications will be suspended. Offshore wind in freshwater lakes is early in development and there are no projects operating in North America. The recently installed Lake Vanern pilot project in Sweden is one of the only operational freshwater offshore projects in the world and a pilot project has been proposed in Ohio. Ontario will monitor these projects and the resulting scientific knowledge. Ontario will work with our U.S. neighbours on research to ensure any future proposed projects protect the environment on both sides of the Great Lakes.

It was three years ago when McGuinty confidently lifted a moratorium on offshore wind projects and declared that such projects, after extensive study and consultation with authorities on the U.S. side of the Great Lakes, could be done responsibly without impact to lake ecosystems. Then came the feed-in-tariff (FIT) program less than two years later, which broke new ground in North America by including a FIT rate for offshore wind — 19 cents per kilowatt-hour compared to 42 cents for large-scale solar projects.

The government has regularly trumpeted its commitment to offshore wind development, and Ontario was well positioned to lead North America in terms of attracting manufacturers and a supporting supply chain that could serve Ontario and the U.S. northeast. One project, to be developed by Windstream Energy, was actually offered a contract under the FIT program, while developer Trillium Power was quite advanced with its project development and preliminary studies and had worked hard to attract foreign manufacturers to Ontario. These companies and others must be furious, having invested millions of dollars already only to have the province do an about-face. I mean, is McGuinty admitting that the consultations and study done three years ago were bogus?

This sends a horrible message to the market. If the government can so easily backtrack on previous commitments, what’s next? What other projects will have their plugs pulled?

Offshore wind was the one truly new opportunity in green energy where Ontario had the opportunity to lead and capture the economic development that would come with it, as this Conference Board of Canada report recently pointed out. Companies such as Siemens and Vestas were seriously eyeing Ontario as a place to lay down their North American anchors. That opportunity is now gone. What’s odd is that it’s apparently okay to have a company like Talisman drill for natural gas in the middle of Lake Erie or to ship radioactive material from a nuclear plant through the Great Lakes, but we can’t erect wind turbines with proper setbacks from shore?

Meanwhile, the U.S. is picking up steam on offshore wind. Just as Ontario is backing away, Maryland is moving forward with legislation that would require its utilities to purchase offshore wind capacity. Virginia is getting its act together, as is New Jersey. The Obama administration has pledged to fast-track offshore wind projects in the mid-Atlantic. New York, Ohio, Michigan and others are all moving forward. Ontario, which had the lead, has decided to disqualify itself from the race and watch from the sidelines.

A truly shocking and disappointing development. There’s no reason why the government couldn’t have honoured its FIT commitments but put in place regulations that made sure only the best sited projects got built. At least this would have got the ball rolling, even if it was just one or two projects that qualified. Environmental concerns can be addressed without having to outright derail the train.

Just like that, a 200-megawatt offshore wind project proposed by utility Toronto Hydro is — to put it bluntly — dead in the water. Ontario’s Ministry of Environment issued a proposed regulation today that would prohibit the development of offshore wind projects that are 5 kilometres or closer to shore. Toronto Hydro’s project would place up to 60 wind turbines between two and four kilometres from shore, so if the proposed rules get passed then the utility’s offshore plan will be terminated. Toronto Hydro’s isn’t the only project that will be killed. There were several “near shore” projects proposed in Lake Ontario and Lake Erie that will be caught in this new setback rule, and even some projects that straddle the five kilometre barrier. Windstream Energy, for example, which is the first developer in North American to get a power purchase agreement for a 300-MW offshore wind farm (i.e. it got a feed-in-tariff contract with the Ontario Power Authority), may have to readjust the layout of its proposed project and drop a few turbines to fit within the rules. Trillium Power, which has a huge 700-MW project proposed for Lake Ontario, wouldn’t be affected because its turbines will be located 17 to 28 kilometres offshore.

I agree that a setback is necessary. I haven’t decided yet whether I think five kilometres it too far or not. I think three kilometers would have been a better compromise. The proposed rules could still change after public consultation, but for now, there are many angry offshore wind developers out there who face the prospects of seeing their projects killed. Toronto Hydro, for example, just spent $1 million or so to put an anonometer in the lake to measure wind speeds for two years. That now looks like wasted dollars. 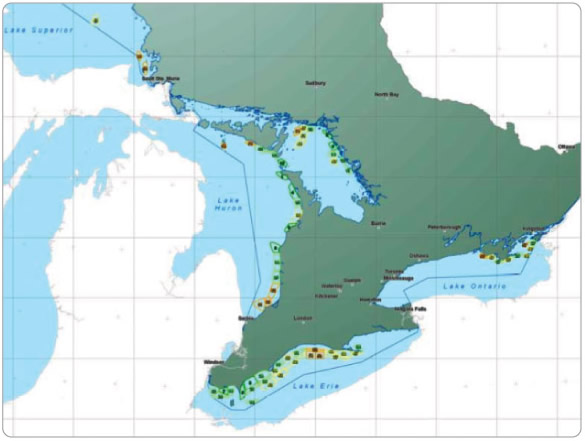 Mississauga-based Electrovaya Inc., maker of lithium-ion Superpolymer batteries, is supplying batteries for a utility-scale energy storage project being spearheaded by CEATI International Inc. of Montreal, an advanced technology centre for utilities. The $7.5 million project will be a large-scale initiative involving multiple utilities and sites. The batteries will be tested as storage for renewable energy generation and as a way to ease distribution and transmission bottlenecks in high-density urban areas. CEATI will also investigate the repurposing of electric-vehicle batteries for smart-grid applications, given that a battery that outlives its usefulness in a vehicle can still be used for many years as general energy storage for the grid.

On the acquisition front, two more promising Ontario cleantech ventures have been plucked up by U.S. firms. On Tuesday Toronto-based biogas maker Stormfisher Biogas announced it had been acquired by Virginia-based Greenhouse Gas Services. Despite having one of the most boring and uninspiring names, Greenhouse Gas Services is a venture of GE Energy Financial Services and AES Corp., so it has some serious backing. The company invests in and develops projects that reduce greenhouse-gas emissions, and it then sells the carbon credits. So here’s my question: If some of the biggest Stormfisher projects are expected to be in Ontario, and since the Ontario Power Authority doesn’t appear to be letting biogas projects keep carbon credits, then what’s in it for Greenhouse Gas Services? I can only speculate that the power authority has quietly decided to let developers keep credits from methane destruction. Something I’ll have to follow up on.

And just today, Sunnyvale, Calif.-based Calisolar announced it had acquired Vaughan, Ontario-based 6N Silicon, a maker of solar-grade silicon that will operate as a wholly owned subsidiary. “In addition, $22.5 million in funding was raised from existing Calisolar and 6N investors,” the companies said in a statement. “The new funds will be used to increase capacity at the Sunnyvale, California cell manufacturing facility and expand silicon purification operations in Vaughan, Ontario.” It’s sad to see 6N fall under foreign ownership so early in its life, but the good news is that Calisolar is likely to set up some module assembly in Ontario to take advantage of the feed-in-tariff program here. Given that its solar cells will contain 6N’s silicon, the company will be well positioned to meet Ontario’s local content requirements and even supply other cell/module makers.

Finally, I have a follow to my story about Vestas and the possibility it will lay roots in Ontario. I spoke Wednesday to the company’s head of global offshore markets, who spoke highly of the Trillium projects and called the opportunity to develop offshore wind in the Great Lakes “fantastic.” He wouldn’t say if Vestas plans to establish manufacturing in Ontario — which isn’t surprising — but given the potential in the Great Lakes, the liklihood of Trillium’s projects moving forward first, and the positive policy and regulatory environment in Ontario (including the feed-in-tariff program, which offers 19 cents per kilowatt-hour for offshore wind power), all the stars are aligned and it’s only a matter of time before Vestas makes its move.

I have a story in today’s Toronto Star about Vestas and why the world’s largest maker of wind turbines is seriously looking at setting up shop in Ontario. Vestas already has a large manufacturing footprint in Colorado, but its interest in southern Ontario has more to do with the potential North American market for offshore wind. So why Ontario? Because offshore wind in the Great Lakes provides a huge opportunity, and Ontario happens to have the most freshwater offshore real estate, as well as a developer, Trillium Power, that is well ahead of the pack with respect to project development. Also, Ontario is the only jurisdiction in North America to have a feed-in-tariff for offshore wind — the province offers 19 cents per kilowatt-hour of offshore wind power. This makes it easier for Trillium, which has four projects totalling 3,700 megawatts in the pipeline, to pioneer offshore development in the Great Lakes.

Some signs that Vestas wants to come to Ontario? Last fall Vestas Offshore opened an office in Toronto that is serving as its North American headquarters for offshore wind sales. Last week company officials flew in to tour a number of potential sites in Hamilton, Niagara, Kingston and Belleville, among others, as possible sites for manufacturing facilities. The officials, according to sources, were also here to size up the local supply chain and supporting infrastructure. And this morning, Trillium announced that it has chosen Vestas as supplier of up to 740 offshore wind turbines for its four projects.

Laying roots in southern Ontario makes sense for Vestas, which is looking at long term growth. The feed-in-tariff program in Ontario provides certainty that demand will be there for both onshore and offshore projects, plus Ontario can serve as a great launchpad into the U.S. market, where states such as New York, Ohio, Michigan and Wisconsin also plan to develop in the Great Lakes. Of course, this is potential business on top of planned offshore projects on the east coast. Ontario simply makes more sense as a location for serving those markets.

If Vestas did commit to Ontario, it would be another major win for the province, which last month confirmed a $7 billion deal with a Korean consortium, led by Samsung, which plans to manufacture and develop 2,500 megawatts worth of wind and solar projects in the province.

Seems strange that Toronto is hosting an offshore wind conference, but I suppose it’s an endorsement of the potential Lake Ontario and the other Great Lakes offer as a home for offshore wind projects. I hope to attend some of this conference, which takes place Wednesday Oct. 21 and Thursday Oct. 22, because hopefully I’ll get some more insight into where Ontario and other jurisdictions are heading. Donna Cansfield, Minister of Natural Resources, is giving the first day morning keynote address, and she’s expected to provide an update on the status of Ontario projects. Click here for the program and information on venue.