There’s been a lot of investment and deployment in renewable energy technologies for power generation and for displacing petroleum products, but as far as we’ve come over such a short time, and as much as triple-digit oil prices are helping to accelerate the transition, the disturbing fact is that higher-priced oil is leading to dramatically more investment in dirtier, harder to access and riskier to extract heavy oil. So while we may be experiencing the beginnings of “peak” conventional oil we’re also seeing the word “conventional” being refined to include heavier crude, starting with the oil sands and now moving toward oil shale and heavy oil trapped in aging oil fields of the Middle East. My Clean Break column takes a closer look at this issue and comes to the conclusion that higher fossil fuel prices alone won’t wean us off fossil fuels, it will only make us go for deeper, heavier and more remote resources in an effort to feed our petro addiction. The answer is to put a meaningful price on carbon, impose stricter environmental regulations and eliminate unnecessary incentives for the oil industry. Sadly, we’re heading in the wrong direction and there’s no sign in Canada or the United States of the political will, or public pressure, required to shift course. What we’ve seen so far is window dressing.

George Monbiot raised this issue in one of his recent columns. He cited the fact that Fatih Birol, chief economist of the International Energy Agency, revealed in late April that crude oil production peaked in 2006. Yet the global economy didn’t collapse as predicted. Why not? “The reason, as Birol went on to explain, is that natural gas liquids and tar sands are already filling the gap,” Monbiot wrote. “Not only does the economy appear to be more resistant to resource shocks than we assumed, but the result of those shocks is an increase, not a decline, in environmental destruction.” The problem, Monbiot continued, isn’t that we have too little fossil fuel but too much. “As oil declines, economies will switch to tar sands, shale gas and coal; as accessible coal declines they’ll switch to ultra-deep reserves (using underground gasification to exploit them) and methane clathrates. The same probably applies to almost all minerals: we will find them, but exploiting them will mean trashing an ever greater proportion of the world’s surface.”

Okay, my headline was intentionally designed to bring some kind of energy angle to this post, but really I just wanted to bring attention to this really intriguing idea of turning old Jumbo Jets into on-site accommodations for air travellers. The picture to the left is a “Honeymoon Suite” inside a cockpit of a Jumbo Jet based at an airport in Sweden. The plane has been converted into a hostel/hotel. They call it the Jumbo Hostel. You can watch a CNN News report here on YouTube or check out pictures at the company’s website.

On the topic of the future of air travel, you might be interested in this presentation from the World Bank’s top air transport expert. There is information about peak oil and the role of efficiency and biofuels near the end. (Hat tip to Ontario Environmental Commissioner Gord Miller for the link).

When are people are going to wake up and realize that business-as-usual is no longer an option? Even Royal Dutch Shell is starting to sound the alarms about our inability to keep up with the growing demand for energy and how this is contributing to profound uncertainty around the world. Shell released today a report titled “Signals and Signposts” and it doesn’t paint a feel-good image of the world over the coming decades. Some highlights of the report, based on Shell’s own summary:

It’s incredible that an oil company can come out with this kind of information yet continue to contribute to the very problems it identifies. Clearly our destiny is on autopilot.

Economist Paul Krugman writes in the New York Times about our Finite World and points out that the rise in commodity prices that will continue into 2011 isn’t as much about speculation, as it was in 2008, or about excessive money creation driving runaway inflation. It’s about one simple thing: we’re running out of stuff, and we need more stuff. Think about it, the world — North America and Europe, in particular — is still struggling to climb out of recessionary doldrums but oil is about to crack $100 a barrel? One might understand triple-digit oil prices if the global economy were on fire, but it’s not on fire — it’s struggling to stay lit. What will happen when it is on fire? Scary, the thought. Krugman’s column is, as usual, worth the read.

The chief economist at the International Energy Agency says peak oil is nigh and that we, as a society, need to start seriously planning for a world without it. Dr. Fatih Birol, in an interview with the U.K. Independent, said total production of oil is likely to peak within 10 years and that most of the biggest oil fields in the world have already hit peak and are declining rapidly. His comment that the peak will come in 10 years is far earlier than most governments are planning on, if they’re planning at all. Some believe we’ve already hit peak, at least when we talk of “conventional oil” production.

“One day we will run out of oil and we have to leave oil before oil leaves us, and we have to prepare ourselves for that day,” Dr. Birol said. “The earlier we start, the better, because all of our economic and social systems are based on oil, so to change from that will take a lot of time and a lot of money and we should take this issue very seriously.”

He went on to say that with peak comes higher and higher prices and increased concentration of power in the handful of countries in the Middle East that have a 40-per-cent share of the market and likely more in years to come. The timing of that interview couldn’t have been better for Nissan, which unveiled its new LEAF electric car over the weekend. 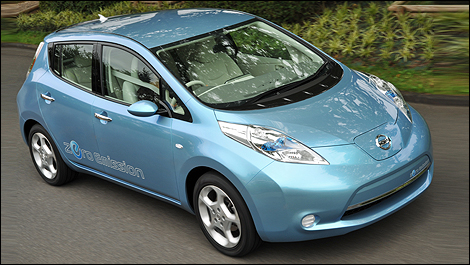 Nissan plans to start selling the LEAF in late 2010 and hopes to go into mass production in 2012. This is a slick-looking car, one that promises to be affordably priced. And unlike other offerings, the battery will be leased, putting all the risk in the hands of Nissan. As I said before, there’s been too much focus on GM’s Chevy Volt, as if it’s the only electric game in town. Fact is, there are many plug-in vehicles — hybrids and all-electrics — being launched between 2010 and 2012. It’s a good sign, because these are the kinds of products we need to transition away from oil, as Dr. Birol so widely advises. We also need several models to enter the market to encourage more investment in the infrastructure needed to support these cars.

Dr. Birol’s  warning and Nissan’s unveiling of the LEAF (among other EV announcements of late) add even more weight to Ontario’s proposed subsidy for purchasers of plug-in hybrid and all-electric vehicles. END_OF_DOCUMENT_TOKEN_TO_BE_REPLACED